PREPARE FOR THE GREATEST JOURNEY OF YOUR LIFE!

One of the lunar colonies

A guidebook was published to a destination that has yet to be visited by a single backpacker. Moon Publications, a US company best known for travel guides to the Americas and Asia, has finally produced a travel guide to the Moon!

"Everything you ever wanted to know about the Moon, mythological, scientific, and more!" - Ray Bradbury.

The book for a lunar-traveler
This is a great book. It tells you where to stay, what to see, where to eat all on the moon! It gives a short history of the moon and some stuff that might happen on the moon (the author predicted that we would find ice on the Moon and we did in the year the book predicted!) This is a must if you love the moon. A reader from Rome, NY, August 12, 1998, Customer Comments, Amazon.com.

More than once, I had to step back and remember that, just because author Koppeschaar had apparently written the book's preface at Moon City, June 2020, this is a work of fiction. It is so skillfully put together that the reader most often remind him- or herself, "Hey! That hasn't happened yet". - Francine Jackson, University of Rhode Island Press, Planetarian, Vol. 26, No. 2, June 1997.

Travel Editor's Recommended Book, 04/01/97:
Moon has provided travel guides to everywhere from Sakatchewan to Timbuktu, so it's about time they came up with the title volume--a handbook to the moon. It's an interesting book even if you haven't exhausted Earth's travel options. Along with detailed chapters on geology and the history of moon exploration, Carl Koppeschaar looks to the future of what moon travel might be like, including a moon museum and monorail transportation system. If you're tired of Europe and shudder at Bali's ruins, scope out a place in line to be the first on your block to vacation on the moon. - Amazon.com, Inc.

It is as timely as it is fanciful: NASA, the American space agency, and 16 aerospace firms have recently begun a study "with a view to establishing a US space tourism business"... So prepare for tantrums when teacher says the journey can't be done. - Michael Kerr, The Daily Telegraph (London, UK), 17 February, 1996.

"In 2020, Koppeschaar will be 66. If the future unfolds as he hopes, look for him when you're wandering through the Christa McAuliffe Memorial Park. He'll be the fellow with the tattered 20th-century guidebook in hand, seeing how much he got right!" - John Masters, The Georgia Straight (Vancouver's News & Entertainment Weekly), February 22-29, 1996.

Get this book and prepare for the greatest journey of your life. The actuality of such a trip may be nearer than you think. - Mark Beffart, Travel Books Review (USA), Spring 1996.

Carl Koppeschaar's Moon Handbook: A 21-st Century Travel Guide is singular among books I have reviewed for Science Books & Film. With unabashed audacity, Koppeschaar presents us with what appears to be a complete travel guide, aimed at the upscale tourist, straight from the 21st century. What wonderful deceit! - Jonathan C. Gradie (TerraSystems, Inc., Kailua, Hawaii), Science Books & Films, August/September 1996.

This is a tongue-in-cheek volume which creates a fictional account to help readers imagine what it would be like to travel to the Moon in the year 2020 AD. - Astronomy Selection, Spaceflight, Vol. 38 No. 9 September 1996.

Koppeschaar's prose is informative and interesting; he avoids getting bogged down in technical details. His theories about how the moon will be colonized are interesting. This would be a good guide for anyone seriously thinking about planning for lunar tourism. - Douglas Messier, Tharsis Library of the 2111 Foundation for Exploration.

A good read for anyone who is even remotely interested in astronomy as it manages to include a good deal of information in an entertaining and very readable format. - R. Yaxley, TravelDex Book Reviews, December 1996.

... we are left to wonder just how long we will have to wait until the real version of Moon Handbook is published. - Book Reviews, SpaceViews, October 1996.

Useful-sounding advice, in classic guidebook style, is plentiful in what must be the world's most unusual travel guide: Moon Handbook: A 21st-Century Travel Guide - Chris Pritchard, The Age (Melbourne, Australia), Saturday 18 May 1996.

"From the origins of "lunacy" to the naming of craters, the Moon Handbook presents a collection of essays about our closest astronomical neighbour. Subtitled "A 21-st-Centuru Travel Guide," it takes a fanciful bent in describing lunar features and the future exploration of our satellite." - Sky & Telescope, June 1996, p. 57.

Review of the Dutch precursor of the Moon Handbook:
"Thank you for the delightful book. What a good idea to put a travel-guide to the Moon in a series like this!" - Arthur C. Clarke.

A preview of the text appeared in Travel Matters: Travel to the Moon: Dreams and Hoaxes at the Dawn of Astronomy.

The National Space Science Data Center (NSSDC) has a Moon home page. NSSDC also provides an overview of the exploration of the Moon and a Lunar Exploration Timeline (1959-19976). It is rather odd to learn that that there exist large discrepancies in the coordinates of lunar Apollo landing sites. Michael Stennecken therefore initiated the The CLLC Initiative (Coordination of Lunar Landing Coordinates.

Craters and other surface features on the Moon can by identified by consulting the Moon nomenclature of the US Geological Survey.

A very interesting site is the International Lunar Exploration Working Group (ILEWG) with links to Current Lunar Missions. I also recommend visiting the Robinson Lunar Observatory, the previous Astronomy Pictures of the Day sorted by subject for Earth's Moon, the American Lunar Society and Richard Evans' Lunar Homepage. For legal affairs you may like to visit Lunar Law Links.

What do you see on the Moon with the naked eye? And what with binoculars, or a telescope? With a spacecraft you can even land on the Moon. The Moon page will show you all these different views on the Moon.

Many more Moon-related links can be found on:

The Totally Lunar Page of ICSTAR.

The Moon - Lunar - Section At The Hampton Roads Central Library.

THE MOON IN THE SKY

To find your spot for a unique golfing holiday on the Moon, take a look from above by means of the Clementine lunar image browser.

Before planning your golfing holiday, carefully read the Rules of Lunar Golf.

For transportation to and from the Moon please check The Artemis Project.

DRIVE YOUR OWN LUNAR ROVER 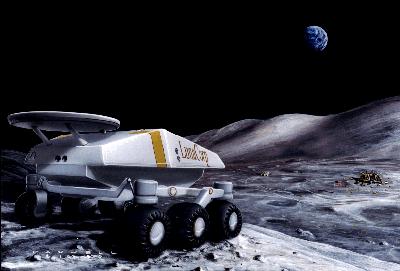 Too expensive, a vacation on the Moon? Then try visiting it by telepresence. You can drive the remote-control rover put on the Moon by the Lunar Rover Initiative. The lunar rover, which transmits live images from its stereo TV camera's, landed near the Apollo 11 landing site and is still performing Neil Armstrong's nostalgic "Moon Track" tour. The Apollo landing sites are popular destinations. An early operator even used the rover to find the grave of lost Soviet rover Lunakhod. You can pilot the lunar rover at interactive stations at science fairs and museums for normal theme-park prices. Also, check out car dealers for free trial runs. "We'll let you test drive the lunar rover if you test drive our latest model," they sometimes advertise.

Mankind's dream of space exploration focused first on the Moon. Jules Verne and H.G. Wells both wrote classic stories on travels to our nearest celestial neighbour. Particia Atner maintains a bibliography of science fiction novels and short stories in which Earth's satellite has a major or at least significant role. Her page The Moon in Science Fiction is a list of sources of which some can even be read on-line.

An extensive list of books on lunar history, science, exploration, biography and fiction can be found on ILEWG's Lunar Explorers Digest.

A bit more than 160 years ago the scientific community and leading astronomers seriously considered the existence of humans on the Moon. Sir William Herschel, a member of a renowned British-German family of astronomers, was among those who were sure that the Moon was habitable. The New York Sun, in a series of articles in August and September, 1835, described the sensational new telescope and the astounding discoveries of Sir John Herschel. Read a full report about this so-called Moon Hoax in Moon Walk 1835: Was Neil Armstrong Really The First Man on The Moon?

ICE ON THE MOON

"In 1997", I wrote in my Dutch travel guide De Maan (1993), "water ice was discovered at the south pole of the Moon." The water ice, I reasoned, was found in a deep crater where sunlight never penetrated. It was buried there by the impact of a comet.

Well, it so happened that I was only one month off! On December 3, 1996 it was announced that the Clementine spacecraft did observe water ice at the south pole of the Moon. The ice appears to be hidden in the eternal shade of a crater. It probably arrived as a comet -- which exists mostly of water ice -- that plowed into the Moon...

Of course, I was not the only one who speculated about the existence of water ice at the lunar south pole. Mike Combs, for instance, wrote the very nice SF novel The Next Best Thing to Being There. Read all about his Darkcrater Base at the south pole of the Moon!

A new report, published in Science of June 6, 1997, suggested that there might not be any water at the lunar poles after all. Additional radar work with the 1,000-foot Arecibo radio dish allegedly has dimmed that prospect. Exploiting favorable Earth-Moon geometry in 1992, Donald Campbell and Nicholas J. S. Stacy used Arecibo's radar beam to peer into the shadowed craters. The presence of water ice would have changed the returning beam's polarization in a telltale way, but that was not seen. "We don't see anything that suggests ice," says Campbell. However, Clementine scientists are standing by their results. The truth may be learned later this year, when Lunar Prospector returns to the Moon to conduct a sensitive search for ice in the polar regions.

Well, on March 5, 1998 the Lunar Prospector did confirm the prescence of ice. So, the Moon Handbook was only a few month off, only due to the delay in launch Lunar Prsopector. I litterally wrote:
"The dark parts of Amundsen are the coldest on the Moon. But a great deal of activity goes on her, for this is where American and Japanes robot prospectors discovered a nearly inexhaustible supply of ice in 1997. Two months after the Lunar Prospector of NASA and the Space Studies Institute in Princeton came across the ice, the Japanes sent their Lunar A to the Moon to investigate further. It plunged a probe equipped with scientific instruments into the site, and it relayed a complete chemical analysis back to Earth. The analysis confirmed the presence of ice."

BACK TO THE MOON 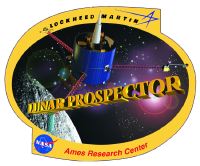 I do hope I made my point now that we HAVE to return to the Moon. It is not only my opinion, but also advocated by the Space Frontier Foundation. There are many Lunar Resources like helium-3 for fusion reactors, ilmenite for making concrete and at the same time producing oxygen.

The first goal we should undertake before establishing a lunar base is a Lunar Water Search Program. The unmanned Lunar Prospector did find enormous quantities of water ice on the Moon, but we still have to find out in what quality. 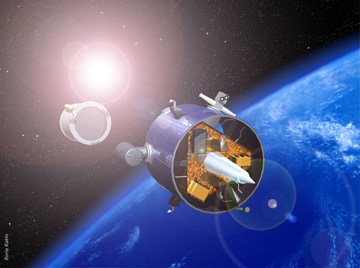 Lunar Prospector spacecraft above Earth, on its way to the Moon

Lunar Prospector was launched on January 7, 1998. Extensive information on Lunar Prospector and a very interesting student's participation program can be found at Moonlink: Bringing space down to Earth.

The Robotics Institute proposed the Icebreaker to inspect the ice at the lunar southpole. For further exploration of the Moon please view Exploring the Moon of the Lunar and Planetary Institute (LPI).