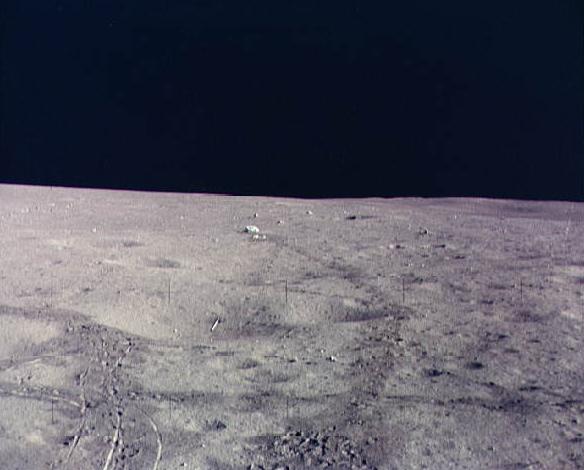 View shows the javelin and golf ball used by Astronaut Alan B. Shepard Jr., Apollo 14 commander, during the mission's second extravehicular activity (EVA-2) on Feb. 6, 1971. Just to the left of center lies the javelin, with the golf ball just below it, almost perpendicular to it. Dark colored trails are the results of tracks made by the lunar overshoes of the astronauts and the wheels of the Modularized Equipment Transporter (MET). This photograph was made through the right window of the Lunar Module, looking northwest.

At the request of the many visitors, the owners of Mont Blanc Resort built a golf range in the middle of the Christa McAuliffe Memorial Park. But golfers beware: Lunar golf is a peculiar cross between miniature golf and the "pitch and putt" holes favored by beginning golfers. The rules are different here.

To begin with, never hit the ball with a full swing. If you were to use a 12 degrees driver as you would on Earth, the ball would land 800 meters away. In the park's artificial atmosphere, aerodynamic balls have a lot of lift. Besides that, the gravity is six times lower than on Earth, and people who fail to complete a full swing are likely to launch themselves. Alan Shepard nearly did that during the second manned mission to the Moon, Apollo 14 (1971).

Shepard, wanting to be the first golfer on the Moon. brought three golf balls that he planned to "drive" across the Moon's surface. He strapped the head of a six iron to the bottom of a sampling instrument and told Mission Control to watch. According to NASA lore, the balls flew off into the distance and landed several kilometers away. In the lunar void, a golf ball hit at a speed of 200 km per hour at a 45 degrees angle would travel 1.9 km. But the truth is that Shepard buried the ball on the first swing. His second swing knocked the ball a few feet before it came to a dead stop. Mission Control, providing commentary, said that the shot was a slice. His last shot was more succesful, and the ball disappeared in a graceful arc in the direction of a crater. "Miles and miles and miles," cried the triumphant Shepard. He left a ball for future golfers (see "Astrotrash" in the "Environmental Issues" section in the Introduction).

To prevent falls, you may putt only with chippers. No lunar golfer's bag would be complete without an ordinary putter and a dust wedge, a club for hitting the ball out of dust traps.

The Shepard Driving Range lies near the landing platform in Plato Crater. Here you can drive luminescent golf balls to your heart's content. Unlike the lunar golf range in Mont Blanc Resort, you can swing as you would on Earth. To keep you from falling, an elastic cable is hooked to the back of your moonsuit. You can aim at two crater pits 1.6 and 1.8 km away. After a half-hour session, it's time to go look for the landing sites of the numbered and multicolored balls.

Back to Moon Handbook