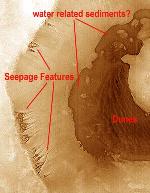 The latest news from Astronomy Now and Spaceflight Now

MARS COULD HARBOR MUCH MORE WATER THAN THOUGHT

The crust of the planet Mars may hold two to three times more water than scientists had previously believed, a researcher says. The finding is based on the study of a meteorite.