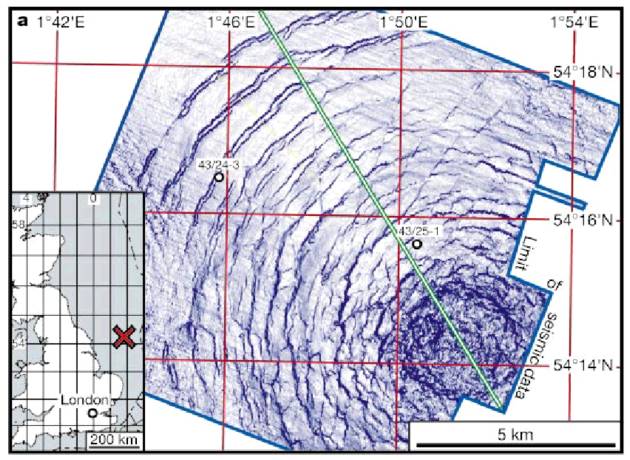 British petroleum geoscientist have mapped a small but extraordinary well-preserved crater formed by a meteorite that impacted Earth 60 to 65 million years ago.

The so-called Silverpit Crater, buried beneath the North Sea's rich oil and gas fields off England's eastern seaboard, measures 10 kilometers wide and sits beneath 36 meters of seawater and 270 meters of sediment. 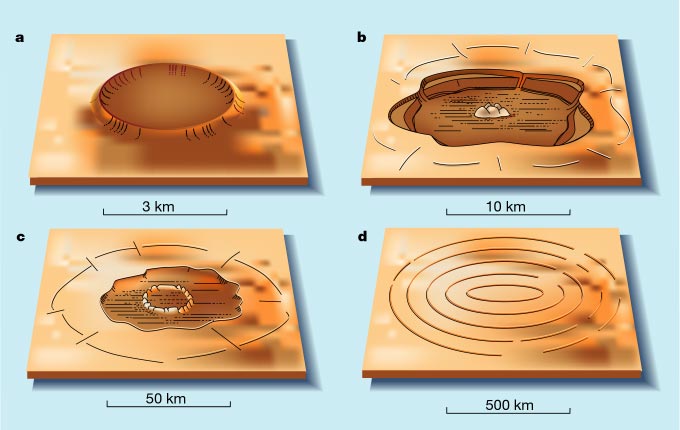 The main types of impact structure, as currently defined from studies of the Earth and Moon. a, At the smallest scale is the simple bowlshaped crater. b-d, At larger scales, more complex structures are evident. b, Central peak; c, peak ring; d, multi-ring.
Illustration: courtesy John Spray

"Details of most impact craters on Earth have eroded by rain, wind and earthquakes over millions of years," Spray continues. "The simplest type of impact crater is a smooth, bowl-shaped depression like the famous Baringer Crater in Arizona. By comparison, the Silverpit is shaped like a basin with multiple rings like shock waves encircling the sides."

Silverpit's main crater is 2.4 kilometers wide with a central peak that probably formed when the Earth rebounded from the impact of the incoming cosmic projectile (isostasis). A series of at least 10 concentric impact rings radiate beyond it.

It is believed that Silverpit crater was formed after the catastrophic impact near Mexico's Yucatan Peninsula that contributed to the extinction of the dinosaurs.

"The real test that Silverpit was created by an impact will be to look for shock effects in the rocks that form it," says Spray. "Shock-generated features such as unusual microscopic mineral deformations and shatter cones (conical fracture systems formed by shock waves in rock) would be compelling evidence of an impact origin. Two wells that were drilled in the search for oil and gas do penetrate the structure, but unfortunately, few samples of the drill cuttings from them were taken. Given that impact structures are among the most productive hydrocarbon sites on the planet, we may get more rock samples if Silverpit shows exploration potential."