Cambridge, MA - A team of astronomers led by Matthew Holman (Harvard-Smithsonian Center for Astrophysics) and JJ Kavelaars (National Research Council of Canada) has discovered three previously unknown moons of Neptune. This boosts the number of known satellites of the gas giant to eleven. These moons are the first to be discovered orbiting Neptune since the Voyager II flyby in 1989, and the first discovered from a ground-based telescope since 1949.

The moon temporarily designated S/2002 N1 is shown here in images from the Cerro Tololo Inter-American Observatory's 4-meter Blanco telescope. A permanent name for the moon must be approved by the International Astronomical Union.
Photo's: Matt Holman, Harvard-Smithsonian Center for Astrophysics

It now appears that each giant planet's irregular satellite population is the result of an ancient collision between a former moon and a passing comet or asteroid. "These collisional encounters result in the ejection of parts of the original parent moon and the production of families of satellites. Those families are exactly what we're finding," said Kavelaars.

Needle in a Haystack

The new satellites were a challenge to detect because they are only about 30-40 kilometers (18-24 miles) in size. Their small size and distance from the Sun prevent the satellites from shining any brighter than 25th magnitude, about 100 million times fainter than can be seen with the unaided eye.

To locate these new moons, Holman and Kavelaars utilized an innovative technique. Using the 4.0-meter Blanco telescope at the Cerro Tololo Inter-American Observatory, Chile, and the 3.6-meter Canada-France-Hawaii Telescope, Hawaii, they took multiple exposures of the sky surrounding the planet Neptune. After digitally tracking the motion of the planet as it moved across the sky, they then added many frames together to boost the signal of any faint objects. Since they tracked the planet's motion, stars showed up in the final combined image as streaks of light, while the moons accompanying the planet appeared as points of light.

Prior to this find, two irregular satellites and six regular satellites of Neptune were known. The two irregular satellites were also the largest: Triton, discovered in 1846 by William Lassell, and Nereid, discovered in 1949 by Gerard Kuiper. Triton is considered irregular because it orbits the planet in a direction opposite to the planet's rotation, indicating that Triton is likely a captured Kuiper Belt Object. (The Kuiper Belt is a disk-shaped collection of icy objects that circle the Sun beyond the orbit of Neptune.) Nereid is considered irregular because it has a highly elliptical orbit around Neptune. In fact, its orbit is the most elliptical of any satellite in the solar system. Many scientists believe that Nereid once was a regular satellite whose orbit was disrupted when Triton was gravitationally captured. The six regular satellites were discovered by the Voyager probe during its encounter with Neptune. The three new satellites were missed by Voyager II because of their faintness and great distance from Neptune. According to Holman, "The discovery of these moons has opened a window through which we can observe the conditions in the solar system at the time the planets were forming."

Holman says, "Tracking these moons is an enormous, international undertaking involving the efforts of many people. Without teamwork, such faint objects could be easily lost."

Based in La Serena, Chile, the Cerro Tololo Inter-American Observatory is part of the National Optical Astronomy Observatory, which is operated by the Association of Universities for Research in Astronomy, Inc., under a cooperative agreement with the National Science Foundation.

The Canada-France-Hawaii Telescope is operated by the CFHT Corporation under a joint agreement between the National Research Council of Canada, the Centre National de la Recherche Scientifique of France, and the University of Hawaii.

The European Southern Observatory is an intergovernmental, European organization for astronomical research. It has ten member countries. ESO operates astronomical observatories in Chile and has its headquarters in Garching, near Munich, Germany.

Headquartered in Cambridge, Massachusetts, the Harvard-Smithsonian Center for Astrophysics (CfA) is a joint collaboration between the Smithsonian Astrophysical Observatory and the Harvard College Observatory. CfA scientists organized into six research divisions study the origin, evolution, and ultimate fate of the universe.

Astronomers have discovered a small body orbiting the Sun at the distance of Neptune whose orbit makes it the first known member of a long-sought population of objects known as Neptune Trojans.

This small body, known as 2001 QR322, leads Neptune around its orbit in such a way as to maintain -- on average -- approximately equal distance from Neptune and the Sun. As such, it mimics the Trojan asteroids of Jupiter, which orbit the Sun in two clouds approximately 60 degrees ahead of and behind Jupiter. The first Jovian Trojan was discovered in 1906, and approximately 1,560 such objects are known today. However, until the discovery of 2001 QR322, Trojan-like objects associated with other giant planets had not been found.

The team first detected 2001 QR322 on August 21, 2001, in deep digital images taken with the 4-meter Blanco Telescope at Cerro Tololo by Marc Buie, Robert Millis, and Lawrence Wasserman of Lowell Observatory. However, several subsequent observations, made with a variety of telescopes over the past 16 months, coupled with numerical orbit integrations of the trajectory of the asteroid, were required to prove that 2001 QR322 is indeed a Neptune Trojan. The object is estimated to be approximately 230 kilometers (140 miles) in diameter and, like Neptune, requires about 166 years to complete each circuit of its orbit.

"Neptunian Trojans were long suspected to exist and it is gratifying to finally know that they do," says team member Eugene Chiang of the University of California at Berkeley. "The orbit of 2001 QR322 is remarkably stable; projections of its trajectory into the future reveal that it can co-orbit with Neptune for at least billions of years. It is likely that 2001 QR322 is a dynamically pristine object whose orbital eccentricity and inclination have been largely unaltered by processes that afflicted the majority of bodies in the outer solar system."

The left-hand panel displays a bird's-eye view of the outer solar system, with the orbits of Jupiter (J), Saturn (S), Uranus (U), and Neptune (N) about the Sun shown schematically. The dark tube of points lying on Neptune's orbit marks the path of the newly discovered Trojan object 2001 QR322, relative to Neptune. The Trojan shuttles back and forth along Neptune's orbit as indicated by the red and green curved arrows. Each full shuttling takes about 10,000 years to complete.

The small inset rectangle at left is magnified in the right-hand panel. When plotted over time, 2001 QR322 traces a local corkscrew pattern. The red curve traces the path of the Trojan as it travels away from Neptune, as indicated by the red arrows. The green curve traces the trajectory of the Trojan as it approaches Neptune. Each full twist of the corkscrew takes about the same time as Neptune takes to revolve around the Sun (166 years).

Kitt Peak and Cerro Tololo Inter-American Observatory are part of the National Optical Astronomy Observatory (NOAO), which is operated by the Association of Universities for Research in Astronomy (AURA), Inc., under a cooperative agreement with the National Science Foundation.

Observations obtained by NASA's Hubble Space Telescope and ground-based instruments reveal that Neptune's largest moon, Triton, seems to have heated up significantly since the Voyager spacecraft visited it in 1989.

"Since 1989, at least, Triton has been undergoing a period of global warming - percentage-wise, it's a very large increase," said James L. Elliot, an astronomer at the Massachusetts Institute of Technology (MIT), Cambridge, MA. The warming trend is causing part of Triton's frozen nitrogen surface to turn into gas, thus making its thin atmosphere denser. Dr. Elliot and his colleagues from MIT, Lowell Observatory, and Williams College published their findings in the June 25 issue of the journal Nature.

Even with the warming, no one is likely to plan a summer vacation on Triton, which is a bit smaller than Earth's moon. The five percent increase means that Triton's temperature has risen from about 37 degrees on the absolute (Kelvin) temperature scale (-392 degrees Fahrenheit) to about 39 degrees Kelvin (-389 degrees Fahrenheit). If Earth experienced a similar change in global temperature over a comparable period, it could lead to significant climatic changes.

Triton, however, is a very different and simpler world than Earth, with a much thinner atmosphere, no oceans, and a surface of frozen nitrogen. But the two share some contributing factors to global warming, such as changes to the Sun's heat output, how much sunlight is absorbed and reflected by their surfaces, and the amount of methane and carbon monoxide (greenhouse gases) in the atmosphere.

"With Triton, we can more easily study environmental changes because of its simple, thin tmosphere," Elliot explained. By studying these changes on Triton, the scientists hope to gain new insight into Earth's more complicated environment.

Elliot and his colleagues explain that Triton's warming trend may be driven by seasonal changes in its polar ice caps. Triton is approaching an extreme southern summer, a season that occurs every few hundred years. During this special time, the moon's southern hemisphere receives more direct sunlight, which heats the polar ice caps. "For a northern summer on Earth, it would be like the Sun being directly overhead at noon north of Lake Superior," Elliot said.

The scientists used one of Hubble's three Fine Guidance Sensors (used to keep the telescope pointed at a celestial target by monitoring the brightness of guide stars) in November 1997 to measure Triton's atmospheric pressure. When Triton passed in front of a star known as "Tr180" in the constellation Sagittarius, the guidance sensor measured the star's gradual decrease in brightness as Triton passed in front of it. The starlight became fainter as it traveled through Triton's thicker atmosphere. 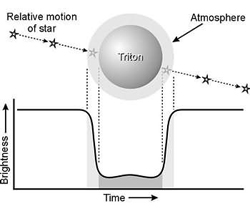 Occultation of a star by Triton.
Image: STScI and NASA.

Elliot and his colleagues list two other possible explanations for Triton's warmer weather. Because the frost pattern on Triton's surface may have changed over the years, it may be absorbing a little more of the Sun's warmth. Alternatively, changes in reflectivity of Triton's ice may have caused it to absorb more heat.

About the same size and density as Pluto, Triton - one of Neptune's eight moons - is 30 times farther from the Sun than Earth is. It is very cold and windy, with winds close to the speed of sound, and has a mixed terrain of icy regions and bare spots. Triton is a bit smaller than our moon, but its gravity can prevent an atmosphere from completely escaping because it is so cold. Its composition is believed to be similar to that of comets - although it is much larger than a comet - but Triton was drawn into a reverse orbit by Neptune's strong gravitational pull.

The Space Telescope Science Institute is operated by the Association of Universities for Research in Astronomy, Inc. (AURA), for NASA, under contract with the Goddard Space Flight Center, Greenbelt, MD. The Hubble Space Telescope is a project of International cooperation between NASA and the European Space Agency (ESA).