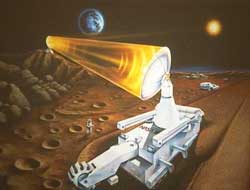 An artist's concept of a Helium 3 mining machine on the Moon. (Photo: ESA)