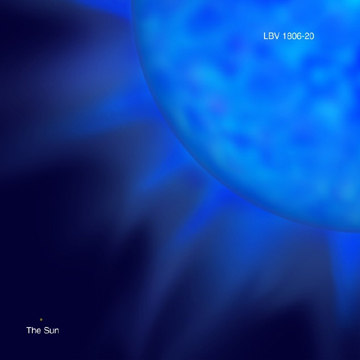 A star that may be the biggest and brightest in the universe dwarfs the sun in this artist's depiction, drawn to scale to demonstrate the star's massive size. The star, dubbed LBV 1806-20, is at least 150 times larger and 5 million times brighter than the sun. Located about 45,000 light years from Earth, it is detectable only with infrared telescopes, because all of its visible light is absorbed by dust particles in space. If it was located as near to the sun as this image suggests, the star's light would completely swamp that of the sun, making it invisible and virtually undetectable.

ASTRONOMERS: STAR MAY BE BIGGEST, BRIGHTEST YET OBSERVED

GAINESVILLE, Fla. -- A University of Florida-led team of astronomers may have discovered the brightest star yet observed in the universe, a fiery behemoth that could be as much as much as seven times brighter than the current record holder.

But don't expect to find the star -- which is at least 5 million times brighter than the sun -- in the night sky. Dust particles between Earth and the star block out all of its visible light. Whereas the sun is located only 8.3 light minutes from Earth, the bright star is 45,000 light years away, on the other side of the galaxy. It is detectable only with instruments that measure infrared light, which has longer wavelengths that can better penetrate the dust.

In a National Science Foundation-funded study scheduled to be presented today at the American Astronomical Society national conference in Atlanta, the team says the star is at least as bright as the Pistol Star, the current record holder, so named for the pistol-shaped nebula surrounding it. Whereas the Pistol Star is between 5 million and 6 million times as bright as the sun, however, the new contender, LBV 1806-20, could be as much as 40 million times the sun's brightness.

"We think we've found what may be the most massive and most luminous star ever discovered," said Steve Eikenberry, a UF professor of astronomy and the lead author of a paper on the discovery that was recently submitted to the Astrophysical Journal.

Eikenberry will discuss his findings in a news conference to be held by the society at 12:30 p.m. today at the Courtland Room in the Hyatt Regency Atlanta, where the conference is being held.

One longstanding problem with gauging the brightness of stars at great distances is that what seems at first to be one amazingly bright star turns out on closer examination to be a cluster of nearby stars. Don Figer, an astronomer at the Baltimore-based Space Telescope Science Institute who led the team that discovered the Pistol Star in 1997, said the high-quality data collected by the UF-led team reduced but did not eliminate this possibility.

"The high-resolution data prove that the object is not simply a cluster of lower mass stars, although it is possible that it is a collection of a few stars in a tight orbit around each other," Figer said. "More study will be needed to determine the distance and singularity of the object in order to establish whether the object is truly the most massive star known."

Astronomers have known about LBV 1806-20 since the 1990s. At that time, it was identified as a "luminous blue variable star" -- a relatively rare, massive and short-lived star. Such stars get their names from their propensity to display light and color variability in the infrared spectrum.

LBVs have "short and troubled lives," as Eikenberry put it, because "the more mass you have, the more nuclear fuel you have, the faster you burn it up. They start blowing themselves to bits."

Eikenberry's team made several key advances that led to the estimate of the star's oversized mass and brightness, he said.

One, they sharpened infrared images obtained from the Palomar 200-inch telescope at the California Institute of Technology's Palomar Observatory using a camera equipped with "speckle imaging," a relatively new technology for improving resolution of objects at great distances.

"The shimmering that you see coming off a hot blacktop road in the summer -- the upper atmosphere kind of does that with star light," Eikenberry said. "Speckle imaging kind of freezes that motion out, and you get much better images."

Composed of 17 astronomers and graduate students, the team also came up with an accurate estimate for the distance from the Earth to the bright star. Team members further determined its temperature and how much of the star's infrared light gets absorbed by dust particles as the light makes its way toward Earth. The scientists relied on data collected by the Blanco 4-meter telescope at the National Optical Astronomy Observatory's Cerro Tololo Inter-American Observatory in Chile.

One of the mysteries about LBV 1806-20 is how it got so big. Current theories of star formation suggest they should be limited to about 120 solar masses, or 120 times as large as the sun, because the heat and pressure from such big stars' cores force matter away from their surfaces. Eikenberry said one possibility is that the big star was formed in a process called shock-induced star formation, which occurs when a supernova blows up and slams the gaseous material in a molecular cloud together into a massive star.

The star's size is not its only distinguishing characteristic. It is located in a small cluster of highly unusual or extremely rare stars, including a so-called "soft gamma ray repeater," a freakishly magnetic neutron star that is one of only four identified in the entire galaxy of 100 billion stars. With a magnetic field hundreds of trillions of times more powerful than Earth's magnetic field, this type of star gets its name from its periodic bursts of gamma rays. The cluster also apparently includes an infant or newly formed star.

"We've got this zoo of freak stars, all crammed together, really nearby, and they're all part of the same cluster of stars," Eikenberry said. "It's really kind of weird."

Also buried within the cluster is an extremely young infant star, Eikenberry said. The presence of the infant star, the luminous blue variable and the soft gamma ray repeater are vivid examples of an important emerging fact about stellar evolution: All stars in a single cluster don't form at the same time, he said. "We're seeing what I think is going to become a textbook example of the fact that stars aren't all born in an instant, even in a small cluster," he said.

Figer, the Pistol Star discoverer, said the research makes an important contribution to astronomers' understanding of the star formation process.

"The findings are significant because such massive stars are very rare and define the upper limits of the star formation process," he said. "The team has made a remarkable contribution to our understanding of the most extreme stars."