The University of Arizona

A new image of Uranus taken by Erich Karkoschka of The University of Arizona Lunar and Planetary Laboratory in Tucson reveals in dazzling color new details on the dynamics of the planet's clouds and rings. 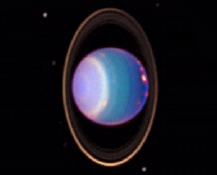 The view shows the planet surrounded by its four major rings and by 10 of its 17 known satellites.

Karkoschka generated the false-color image from observations he made on Aug. 8 using NICMOS, the Near Infrared Camera and Multi-Object Spectrometer, a UA-developed instrument on board NASA's Hubble Space Telescope (HST). Hubble recently found about 20 clouds on Uranus - nearly as many clouds as the previous total in the history of modern observations.

The Space Telescope Science Institute in Baltimore, Md., the astronomical research center responsible for operating the HST as an international observatory, released the image today on the World Wide Web at http://www.stsci.edu. (See it also on the UA Science and Research web site.

The orange-colored clouds near the prominent bright band circle the planet at more than 300 mph (500 km/h), according to team member Heidi Hammel of the Massachusetts Institute of Technology. One of the clouds seen on the right-hand side of the image is brighter than any other cloud ever seen on Uranus.

The colors in the image indicate altitude. Green and blue regions show where the atmosphere is clear and sunlight can penetrate deep into the planet, according to team member Mark Marley of New Mexico State University.

The Hubble image is one of the first images revealing the precession of the brightest ring with respect to an image taken in 1997, Karkoschka said. Precession makes the fainter part of the ring (currently visible on the upper right-hand side of the image) slide around Uranus once every nine months. The fading is caused by ring particles crowding and hiding each other on one side of their eight-hour orbit around Uranus, he said.

The blue, green and red components of this false-color image correspond to exposures taken at near-infrared wavelengths of 0.9, 1.1, and 1.7 micrometers. Thus, regions on Uranus appearing blue reflect more sunlight at 0.9 micrometer than at the longer wavelengths, Karkoschka said. Apparent colors on Uranus are caused by absorption of methane gas in its atmosphere, an effect comparable to absorption in our atmosphere which can make distant clouds appear red, he added.

Karkoschka has used the Hubble Space Telescope to take images of Saturn, Titan and Uranus to derive the vertical atmospheric structure of gases and aerosols. His infrared image of Saturn, taken with NICMOS on Jan. 4, 1998, and released on April 23, provides detailed information, in vivid color, on the clouds and hazes in Saturn's atmosphere.

Karkoschka was among the scientists who calibrated and analyzed Hubble Space Telescope data taken during and after the impact of comet Shoemaker-Levy 9 on Jupiter in 1994. He also is part of UA scientist Martin Tomasko's team that designed and built the Descent Imager/Radial Spectrometer (DISR) on board the European Space Agency's Huygens Probe, part of the Cassini Mission to Saturn.