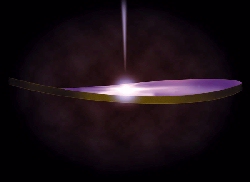 Astronomy Picture of the Day: The Centre of NGC 6251 is Glowing

Probing the heart of the active galaxy NGC 6251, NASA's Hubble Space Telescope has provided a never-before-seen view of a warped disk or ring of dust caught in a blazing torrent of ultraviolet light from a suspected massive black hole.

This discovery, which is reported in the September 10 issue of the Astrophysical Journal Letters, suggests that the environments around black holes may be more varied than thought previously, and may provide a new link in the evolution of black holes in the centers of galaxies.

"This is a completely new phenomenon which has never before been seen. It blew my mind away," says Dr. Philippe Crane of the European Southern Observatory, in Garching, Germany. "Before Hubble you could never do this kind of research. We used a lightly exploited facility of Hubble: its extremely high resolution imaging capability in the near ultraviolet provided by the Faint Object Camera (FOC), built by the European Space Agency."

Previously, black holes observed by Hubble have been largely hidden from view because they are embedded inside a torus, a donut-shaped distribution of dust that forms a partial cocoon around the black hole.

In galaxies previously studied, the intense light from super hot gas entrapped by the black hole's powerful gravitational field shines out from inside the "donut hole" of the torus and is restricted to a narrow beam, like a searchlight.

But this is the first clear example of an "exposed" black hole that illuminates the surrounding disk. Because Hubble sees ultraviolet light reflected on one side of the disk, astronomers conclude the disk must be warped like the brim of a hat.

The suspected black hole's mass has not yet been confirmed through velocity measurements of entrapped material, though yet unpublished Hubble measurements have been made with the Faint Object Spectrograph (FOS), prior to its replacement during the 1997 Hubble servicing mission.

Hubble's sensitivity to ultraviolet light, combined with the exceptional resolution of the FOC which can see details as small as 50 light-years across, allowed Crane and his team to look for structure in the hot gas near the black hole at the base of the jet. Crane was surprised to see a peculiar finger-like object extending from the nucleus, at right angles to the main jet.

Comparing the FOC image to a visible light image taken with Hubble's Wide Field Planetary Camera 2 (WFPC2), Crane realized the finger-like extension ran parallel to a 1,000 light-year-wide dust disk encircling the nucleus. He concluded that the ultraviolet light must be reflecting off fine dust particles in a disk, or possibly the back wall of a ring. A ring-like structure would have been shaped by a torrent of radiation coming from the exposed black hole, which would have plowed out a cavity around the hole.

The Hubble astronomers are hoping to confirm ideas about scattering by looking at the disk's spectrum with ground-based telescopes. They will propose to use Hubble to look at several other extragalactic jet sources which have dust.

The Space Telescope Science Institute is operated by the Association of Universities for Research in Astronomy, Inc. (AURA) for NASA, under contract with the Goddard Space Flight Center, Greenbelt, MD. The Hubble Space Telescope is a project of international cooperation between NASA and the European Space Agency (ESA).

Photos, captions and press release text are available via the World Wide Web at

and via links in

NASA's Hubble Space Telescope has provided a never-before-seen view of a warped disk flooded with a torrent of ultraviolet light from hot gas trapped around a suspected massive black hole.

[Right]
This composite image of the core of the galaxy was constructed by combining a visible light image taken with Hubble's Wide Field Planetary Camera 2 (WFPC2), with a separate image taken in ultraviolet light with the Faint Object Camera (FOC). While the visible light image shows a dark dust disk, the ultraviolet image (color-coded blue) shows a bright feature along one side of the disk. Because Hubble sees ultraviolet light reflected from only one side of the disk, astronomers conclude the disk must be warped like the brim of a hat. The bright white spot at the image's center is light from the vicinity of the black hole which is illuminating the disk.

[Left]
A ground-based telescopic view of the core of the elliptical galaxy NGC 6251. The inset box shows Hubble Space Telescope's field of view. The galaxy is 300 million light-years away in the constellation Virgo.

Perpendicular to the disk is a jet of high-energy particles blasted into space along the black hole's spin axis.