The Anglo-Australian Observatory and CSIRO helped choose the patch of sky in which the HST found the previously unknown galaxies. They are now helping Hubble astronomers to learn more about these new discoveries.

Preliminary HST results were released today by NASA's Space Telescope Science Institute, as were the results from the Australian institutions.

The piece of sky is tiny, the size of an echidna's eye on a five-cent piece held at arm's length. Called the Hubble Deep Field South, it complements the original Hubble Deep Field, another small patch in the northern sky.

The HST wowed the scientific world when in late 1995 it stared at the apparently blank piece of sky and found in it remarkable distant fossil galaxies, some formed when the Universe was only a tenth of its present age.

This time around astronomers wanted a piece of sky with a distant quasar (a galaxy with an extremely bright centre) in it. The quasar lights up and makes visible any material in space between it and the Earth, like a car headlight shining through fog at night.

Astronomers of the Anglo-Australian Observatory in Sydney, aided by their colleagues in Cambridge, UK, painstakingly sifted through their photographic records of the whole southern sky until they found a likely quasar, 10 billion light-years distant. CSIRO's Parkes radio telescope and the Anglo- Australian Telescope were used to confirm that the quasar was suitable. CSIRO's Australia Telescope was used to check that there were not too many confusing radio sources in the field.

Every major telescope that can see the Deep Field South has also made observations of the field and is releasing them to the astronomical community at the same time as the HST results come out.

"This is a new way of working," said Dr Ray Norris, head of Astrophysics at CSIRO's Australia Telescope National Facility. "Everyone is putting their data on the Web, warts and all. The galaxies in this field are being studied incredibly intensively, with optical, radio, infrared and UV observations all being made at more or less at the same time."

"We currently each have one piece of the jigsaw puzzle which will be put together to reveal a new picture of the distant Universe," said Dr Brian Boyle, Director of the Anglo-Australian Observatory.

The Anglo-Australian Telescope has measured the distances of about 75 faint far-flung galaxies in the field.

"These distances can be combined with other information to produce a 3D map of this part of the Universe," explained Dr Boyle.

"Those galaxies for which we have the distances are all young --'newborns', so to speak," he said. "The gas clouds that are lit up by the quasar are probably forming galaxies -- embryos. We want to compare the two kinds, to build up a picture of the life cycle of galaxies from creation through to old age."

"We have already found one extremely puzzling object," said Dr Norris. "We don't know what it is."

"It could be a very distant version of a kind of galaxy we know about, called a starburst galaxy, obscured by dust. But to be at that distance and still look so big, it would have to be enormous. On the other hand, we really don't know what to expect from galaxies at that distance."

"It will take astronomers months to digest all this new data," predicted Dr Boyle. 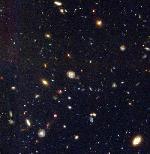 Images and photo captions
associated with this release
are available on the Internet.

Turning its penetrating vision toward southern skies, NASA's Hubble Space Telescope has peered down a 12 billion light- year long corridor loaded with a dazzling assortment of thousands of never-before seen galaxies. The observation, called the Hubble Deep Field South (HDF-S), doubles the number of far-flung galaxies available to astronomers for deciphering the history of the universe.

This new far-look complements the original Hubble "deep field" taken in late 1995, when Hubble was aimed at a small patch of space near the Big Dipper. The new region is in the constellation Tucana, near the south celestial pole.

The 10-day-long observation was carried out in October 1998 by a team of astronomers at the Space Telescope Science Institute (STScI), Baltimore, MD, and NASA's Goddard Space Flight Center, Greenbelt, MD. It is being made available today to the worldwide astronomy community for further research, and to the general public interested in the most distant reaches of the cosmos.

"The southern field promises to be the most studied area of the sky over the next five years," says STScI astronomer Robert Williams, when as STScI Director, he used his discretionary time to undertake the first deep field campaign, and has overseen the latest observation.

"We have eagerly awaited this new set of images ever since the first HDF, which had a dramatic impact on the entire science of astronomy. Hubble's deep field views revealed a large, heretofore unseen fraction of the universe and opened it up to interpretation and understanding."

It will take months for astronomers to digest what new secrets of the universe are within this latest look. At first glance the HDF-S appears to validate the common assumption that the universe should look largely the same in any direction.

The two deep fields now give astronomers two "core samples" of the universe for better understanding the history of the cosmos. The pair of observations can be compared to more confidently infer the state of the cosmos as a whole. It would take astronomers 900,000 years to use Hubble to survey the entire sky to the depths of the HDF. So, they must rely on a thin, "looking-through-soda straw" view across the cosmos and infer the history of star and galaxy formation.

The new deep field also provides an astronomical gold mine for powerful new ground-based telescopes located in the southern hemisphere to undertake follow-up observations of galaxies and precisely measure their distances.

All of Hubble's new cameras and other instruments were trained on the sky simultaneously for the observation. The Space Telescope Imaging Spectrograph was used to dissect light from a quasar (bright, active core of a distant galaxy) in its field of view. The light from the quasar has traveled nearly three- quarters of the way across the universe, and provides a powerful three-dimensional probe of the universe's hidden structure. Invisible clouds of primeval hydrogen gas strung along billions of light-years between us and the quasar will be detectable in the signature of the quasar's light. The quasar is so brilliant it is like a searchlight shining through haze.

The original HDF engaged hundreds of astronomers around the world. Broad conclusions were drawn based on meticulous follow-up studies of the myriad galaxies along Hubble's extremely narrow line-of-sight. To date, conclusions about the rate of star formation and evolution of galaxy shapes have been based on this one narrow "core-sample" of the universe. Because the original HDF was picked as a seeming bland example of what the universe at large probably looks like, astronomers have assumed it was a representative sample. But they needed a second sample to validate early assumptions, and they needed a field that contained a distant quasar to give them important additional information that the northern field did not contain.

The Space Telescope Science Institute is operated by the Association of Universities for Research in Astronomy, Inc. (AURA) for NASA, under contract with NASA's Goddard Space Flight Center. The Hubble Space Telescope is a project of international cooperation between NASA and the European Space Agency.